Skip to content
Ovarian cancer screenings for women who are at low risk are not recommended. The U.S. Preventive Services Task Force did an extensive review to see whether screening lowered the number of women who die from the ovarian cancer.But screening not only didn’t prevent any deaths, it also led to harm, the panel said. 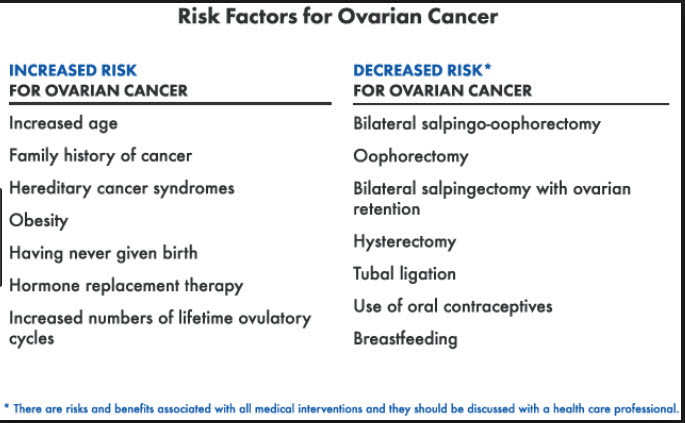 Ovarian cancer is the fifth leading cause of cancer deaths among women. It is difficult to detect early. Symptoms, such as abdominal pain and bloating, can be vague and are usually caused by other conditions. About 22,000 new cases of were expected in the U.S. in 2017. It kills about 14,000 women a year in the U.S., a death rate that has not changed in decades.These results showed that screening women who were not at higher risk did not reduce the number of women dying from ovarian cancer. Indeed, it sometimes led to psychological distress from abnormal test results.In these studies, a positive screening test most often was a false positive. Unnecessary surgery was another harm. If cancer is suspected, the usual next step is to remove the ovary.Women known to be more likely to get ovarian cancer due to hereditary factors, such as mutations in the BRCA 1 and 2 genes, should still be screened.

The studies included about 294,000 women of average risk for getting ovarian cancer. Some of the women were randomly assigned to get the screening, while the rest were not. They were all followed to see if they got ovarian cancer and if they died from it.

The task force said there is ”moderate to high certainty” that screening has no overall benefit. Indeed, the harms outweigh the benefits.

This recommendation  is consistent with those issued by other major medical organizations, such as the American Cancer Society.
For women with a family history, the task force recommends screening with tools to assess their chances of getting cancer. In addition, if needed, referral to genetic counseling. Women with BRCA mutations, known to raise the odds, may choose to have their ovaries and fallopian tubes removed.