Sickle cell anemia is an inherited blood disorder that affects over 100,000 people, including senior citizens in the United States. It’s passed on from parents to children through genes. These genes start your body to make abnormal hemoglobin. Hemoglobin is a protein in your red blood cells.

Healthy red blood cells are round and flexible. They move through your small blood vessels and bring oxygen to all parts of your body. In sickle cell anemia, however, the red blood cells are misshapen, hard and sticky. Consequently, they get stuck in blood vessels and clog them. This causes pain, infection, organ damage, low blood count and strokes.

To date, the only cure is a blood or marrow transplant (BMT) This treatment takes healthy blood-forming cells from a donor and transfers them to you through IV infusion.

The Food and Drug Administration (FDA) on Monday approved a once-daily pill for this disease that works by boosting hemoglobin. Hemoglobin is an oxygen-carrying molecule found in red blood cells.

The new drug, called Oxbryta, is manufactured by biotech firm Global Blood Therapeutics (GBT) and will be sold under the brand name Oxbryta. The drug’s approval came three months earlier than expected.

Oxbryta works by attaching oxygen more tightly to hemoglobin. By keeping hemoglobin in a highly oxygenated state, the red blood cells maintain a normal shape and don’t clump together. By not clumping, red blood cells can quickly transport oxygen throughout the body and prevent red blood cell destruction. 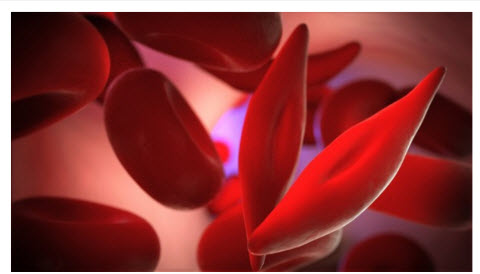 Fifty One percent of patients given Oxbryta showed a significant hemoglobin increase, combined with a significant reduction in pain. Boosting hemoglobin levels can lead to lower incidences of strokes.

The FDA also requires that Global Blood do a follow-up clinical trial to confirm the drug’s benefit. That trial will use an imaging technique known as transcranial doppler to measure improvement in blood flow.