Sitting excessively has been linked to poor memory and dementia in middle aged adults and seniors. UCLA researchers discovered that among adults aged 45–75 without dementia, those who spent more time sitting in the day had greater thinning of the medial temporal lobe. This area of the brain is important for making new memories. Even high levels of exercise can not reverse the effects of excessive sitting. 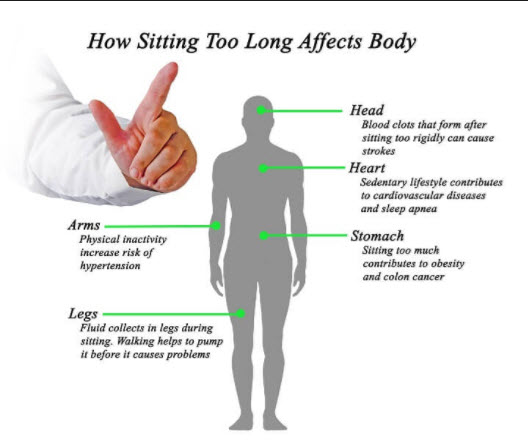 There is an extensive amount of literature that suggests that physical exercise might delay the development of Alzheimer’s disease , and other dementias.

One explanation is that physical activity raises blood flow in the brain, and this helps the growth of new nerve cells. This prevents decline in brain structure and function. On the other hand, there is currently  little information on the effects sitting on memory and the brain.

Evidence also indicates that around 13 percent of Alzheimer’s disease patients may be linked to spending too much time sitting.

Researchers tested 35 participants aged 45–75 who did not have symptoms of dementia.

They found that the more sedentary people had less medial temporal lobe thickness.

Reduced blood flow in the brain, which, in turn, impairs brain health, may be the reason.

Posted in Healthcare News & Information and tagged dementia, information processing, medial temporal lobe, poor memory, Sitting, Tower Lodge Care Center
← Healthy Foods You Should Eat To Stay Fit And EnergeticDrooling In Seniors: What It Is, Why It Happens, How It Is Treated →