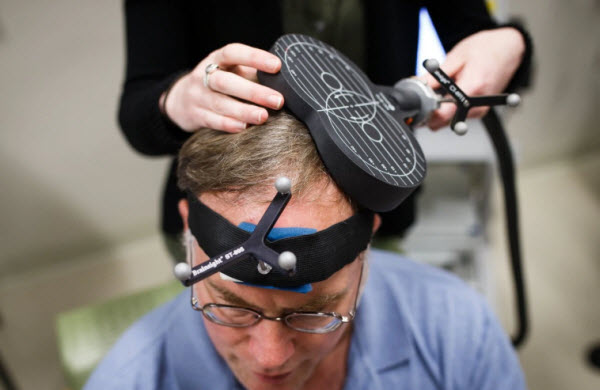 Transcranial magnetic stimulation (TMS) was given to 15 senior citizen participants, ages 64 to 80. Each session lasted for twenty minutes over five consecutive days.

The stimulator was externally positioned behind the ear, corresponding to the hippocampus. Previous research studies confirmed that the hippocampus is responsible for short-term and long-term memory processing.  The stimulation consisted of  a steady tapping sensation.

Prior to the TMS hippocampus stimulation, baseline testing showed that seniors had lower scores on a recall test compared to younger subjects.

One day after the final brain stimulation sessions, participants were re-tested. The memory and recall of senior citizens had improved to the point where it was indistinguishable from the younger participants. One week latter, both groups were re-tested — the seniors memory was still better than their baseline scores.

The placebo group showed no improvement.

Of special interest, is the finding that the magnitude of benefit achieved by seniors was greater compared to younger adults. It appears that individuals with the greater memory loss benefited the most from brain stimulation.

The next research study will investigate the duration of memory improvement in seniors. Is it short term or long term? Also, would more days of hipppocampal stimulation provide longer lasting results?

In addition, the Northwestern scientists are currently testing TMS on senior citizens diagnosed with early-stage Alzheimer’s disease. The TMS is given over several consecutive weeks. The expectation is that a longer period of stimulation will provide more lasting benefits to these Alzheimer’s patients.