The Genio implant is manufactured by Nyxoah and prevents obstructive sleep apnea (OSA). This device has been approved in Europe and now awaits approval by the FDA in the United States.

Sleep apnea is a serious sleep disorder that occurs when a person’s breathing is interrupted during sleep. People with untreated sleep apnea stop breathing repeatedly during their sleep, sometimes hundreds of times. This means the brain — and the rest of the body — may not get enough oxygen. The condition raises your risk for other health issues like high blood pressure and diabetes.

The more common of the two forms of apnea, it is caused by a blockage of the airway, usually when the soft tissue in the back of the throat collapses during sleep.

Obstructive sleep apnea is often is often caused by the tongue blocking the airway during night-time breathing.  Positive airway pressure (PAP) is the current way of raising the tongue and allowing air to flow through. PAP requires wearing a mask at night while you’re asleep. The mask connects to a hose that regulates air flow. The face mask is worn through the night. 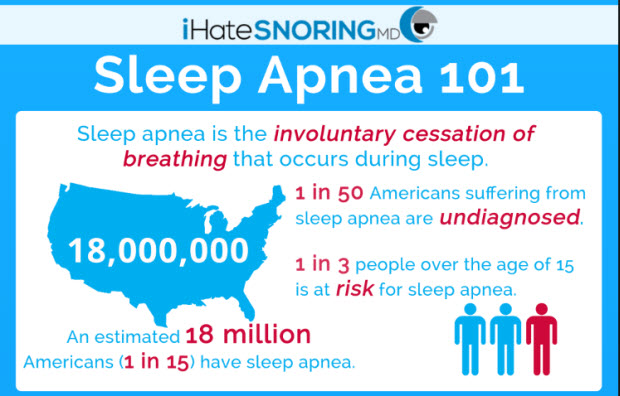 Sleep apnea can affect anyone at any age, even children. Risk factors for sleep apnea include:

If left untreated, sleep apnea can increase the risk of health problems, including:

Genio Implant: How It Works

The Genio implant is surgically implanted into the back of the tongue.  The surgery takes all of 15 minutes. and includes a tiny microchip . This chip electrically stimulates the tongue, and gets it out the way during each breathing cycle.  The only thing left to wear is a battery patch stuck on the chin over the implant site, which sends radio frequency signals that actually activate the implant. The implant has no battery and should be functional for years following since it won’t need replacement.