Sleep of six to eight hours a night is vital for your continued good health. While doctors repeatedly advise to get enough sleep, hectic daily schedules prevent many of us from getting it.

In addition, people with any of these health problems who clocked less than six hours a night had twice the risk of dying from heart disease or stroke.

Even more so, short-sleepers who already suffered from heart disease or stroke had three times higher risk of dying from cancer.

Sixteen hundred adults between the ages of 20 and 74, with a median age of 47, were  divided into three groups:

Patients spent one evaluation night in a sleep lab between 1991 and 1998, then tracked through 2016. During that time period, there were 512 deaths, a third from heart disease or stroke and a quarter from cancer.

The researchers believe that sleep deprivation increases inflammation, that in turn, spurs the growth of cancerous cells. It can also worsen existing inflammation in people suffering from high blood pressure, heart disease, or Type-2 diabetes.

And another recent study done in England,  found a link between short sleep and risk of heart disease even among those with no risk factors.

The sleep habits of 400,000 people between the ages of 40 and 69 were evaluated. People sleeping less than 6 hours a night, increased their risk of a first heart attack by 20 percent compared to people who slept between six and nine hours.  Indeed, other studies show a correlation between sleep deprivation and greater amounts of  beta amyloid and tau proteins in the brain, which raises risk of Alzheimer’s disease. 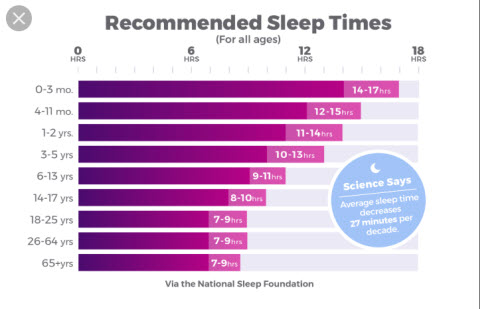 Sleep: How To Avoid Sleep Deprivation

Be consistent. When sleep has a regular rhythm, your biological clock will be in sync and the rest of your bodily functions will run smoothly. Go to bed and get up at the same times.

Stay hydrated. Go easy on the tea and coffee. Caffeine is a diuretic and dehydration can make you irritable and increase insomnia. The same goes for alcohol. Don’t drink at least 3 hours before your bedtime. Alcohol disrupts and cuts down on the amount of REM that you need every night. REM sleep is vital for smooth cognitive functioning and good mood.

Eat a light dinner. Choose a meal that’s high in fiber and low in saturated fat.

Check your Vitamin D level. Vitamin D deficiency is linked to insomnia, especially in people over age 50, according to a 2017 study published in PLOS One.  It’s also important to make sure you’re getting enough vitamin B6, since it helps your body produce hormones such as serotonin and melatonin.