New research presented this week at the Alzheimer’s Association International Conference 2019 suggests that sex-specific genes and brain architectural differences can explain women’s higher risk compared to men.  According to Alzheimer’s researchers, gender differences should be taken into account for brain diseases, much the same as they are for depression and heart disease.

One puzzle for Alzheimer’s research scientists has been why women still outperform men on verbal memory tests, although both have similar levels of  Alzheimer’s brain deficits. Consequently, women are often diagnosed in the later stages of Alzheimer’s since early verbal memory  tests, may not detect cognitive deficiencies.

In one study, researchers gave 1,000 older adults brain scans to measure levels of amyloid plaque, one of the hallmarks of Alzheimer’s. They also measured how well the participants’ brains metabolized glucose in regions affected by this disease. Why glucose? It is the primary energy source of the brain, and difficulty in  metabolizing it, can indicate brain dysfunction.

Subsequently, on verbal memory tests, women outperformed men when mild to moderate amyloid plaque was present. But, a key difference was that women were metabolizing more brain glucose. This suggests that women have better brain efficiency, since they use glucose to help compensate for a growing brain deficit.

On the other hand, women perform as badly as men on verbal memory tests, once severe amyloid plaque builds up. This severe buildup significantly slows down their glucose metabolism. 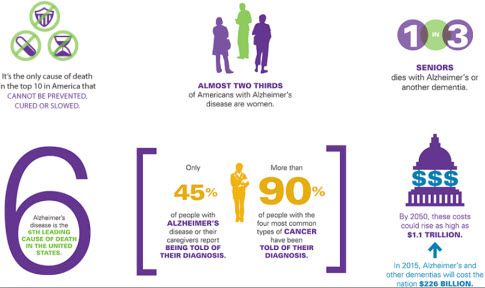 A second study investigated a different hallmark of Alzheimer’s, called the ‘tau protein’. This brain protein will clump in Alzheimer’s disease. And as the clumps increase and spread, they will cause healthy brain cells to die.

Researchers at Vanderbilt University Medical Center examined tau in the brains of both men and women who had (MCI). MCI is a precursor to Alzheimer’s.

They found that women with MCI not only had more tau but more complex networks of it. “The good news is that, initially, they are able to overcome challenges related to Alzheimer’s more easily, since they draw on the greater networking power of the brain,” explains Maria Carrillo, chief science officer of the Alzheimer’s Association. “But the bad news is once the tau tangles have spread all along those networks, it leads to a more rapid cognitive decline.”